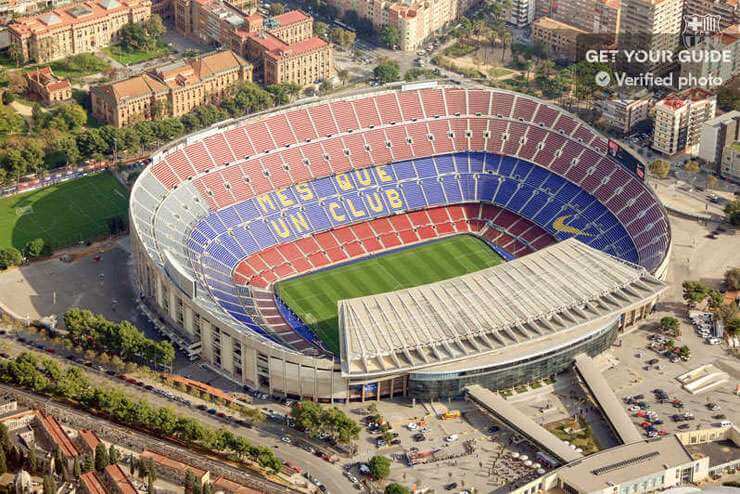 Camp Nou is where FC Barcelona, ​​one of the best football teams in the world, plays its games. It is a real temple of football, where every footballer in the world dreams of playing. It is a stadium that ignites the imaginations of not only footballers but also fans. This is a must see when visiting Barcelona!

Being in the grounds belonging to FC Barcelona, ​​the most important of them will, of course, be the FC Barcelona stadium, which we should definitely visit. So where do you start visiting Camp Nou?

I suggest that before visiting the FC Barcelona museum, go around the stadium, looking at the buildings and statues located in this area. This is important because the Barcelona stadium is adjacent to the former la Masi building, where the greatest footballers of the current epic started their first football steps (Iniesta, Pique, Xavi or Leo Messi, who is considered to be the best player in the history). Walking around the stadium, we will also notice that its facade is full of coats of arms very similar to the coat of arms of Barcelona, ​​although each of them will differ significantly from it with some element. These are the shields of fan clubs scattered around the world that support their beloved team. There are also several sculptures near Barcelona stadium to remind you of the site’s long history. Barcelona is already 120 years old! And during this period it has become the most successful club in history (taking into account all the sports sections operating within the club) also in this club, at the Camp Nou stadium the best players of their epochs played, it was here that Laszlo Kubala, Johan Cruyff and Ronaldinho played. The Camp Nou stadium is a true legend not only of the club, but also of the city

A visit to the museum

A visit to Camp Nou must be combined with a visit to the club museum and seeing how the stadium in Barcelona works and functions. Certainly it is an incredible attraction not only for children, but also for everyone who is interested in football. So, once we managed to buy tickets for the Camp Nou Experience, let’s direct our steps to the best attractions that the Barcelona stadium has for us. The club museum is a zone where we can admire an incredibly rich collection of cups and trophies won by the club. All the best cups – including winning the Champions League 5 times – and information about them proudly decorate this Camp Nou zone, reminding you why Barcelona is the biggest club in the world! 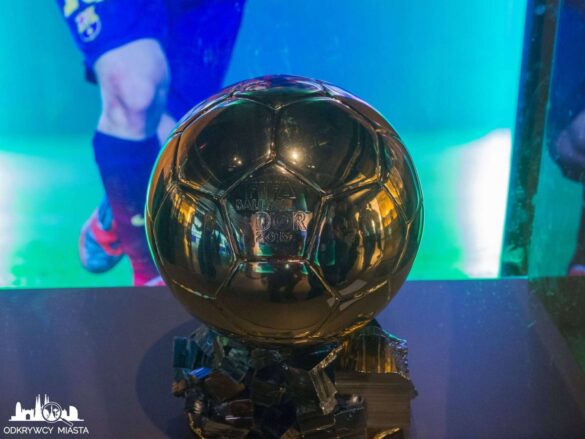 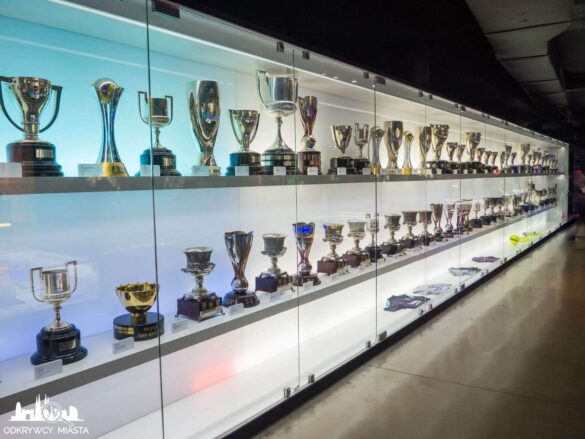 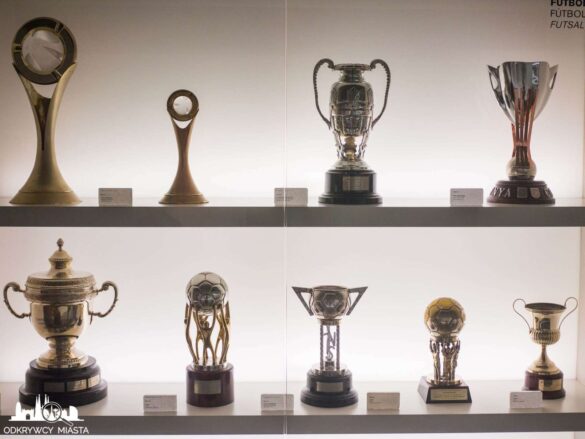 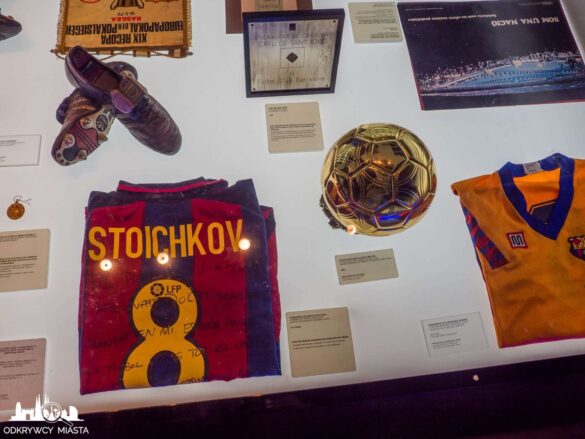 After visiting this part of Camp Nou, we go to the mixed zone. This is where the players give short interviews and take pictures in front of the sponsors’ logos. Then we will direct our steps to the conference room where the trainer and team representatives answer journalists’ questions. 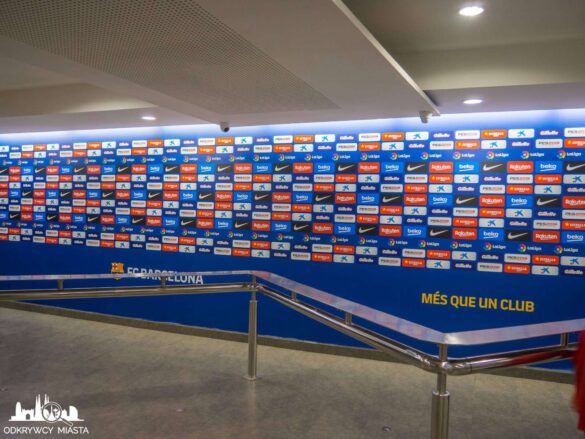 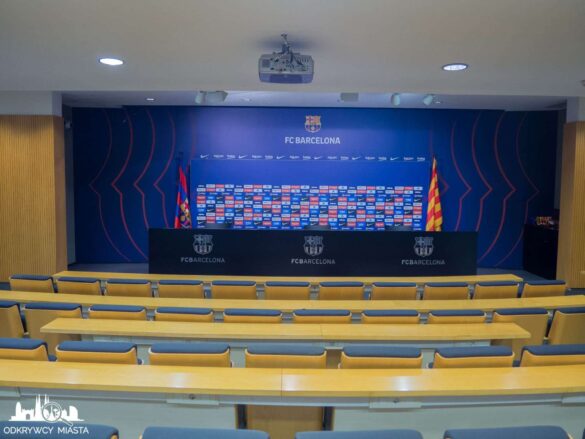 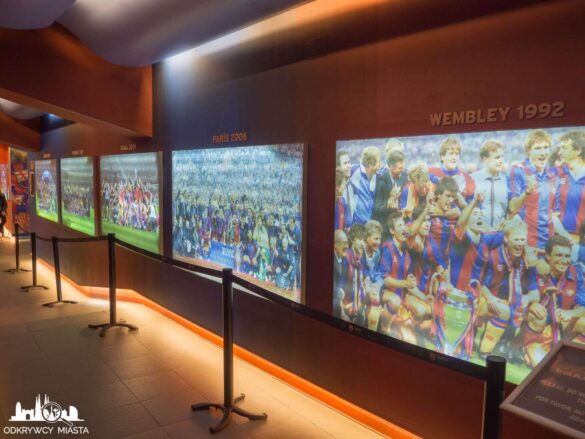 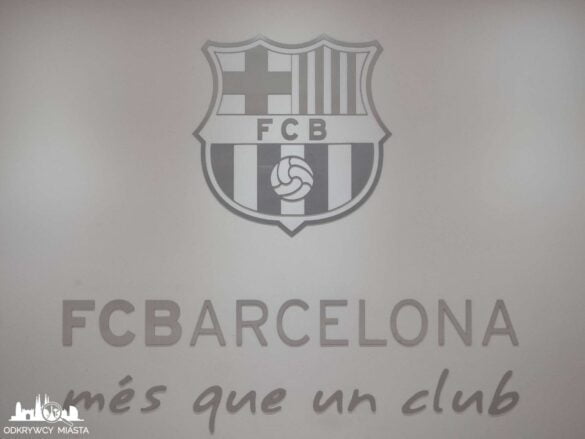 Then, one of the best attractions during the Camp Nou experience, i.e. a visit to one of the dressing rooms (usually guests), where we can see the conditions under which the players are preparing for the matches at the Camp Nou. It must be admitted that the changing rooms may surprise us with their simplicity and poor equipment for the best club in the world, but it is here that the players spend their last moments before going to the pitch at Barcelona Camp Nou. 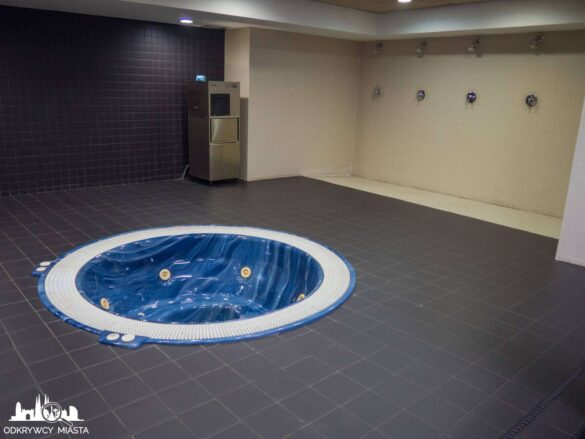 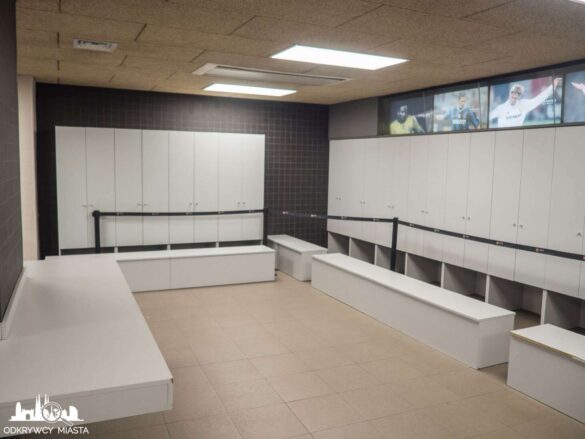 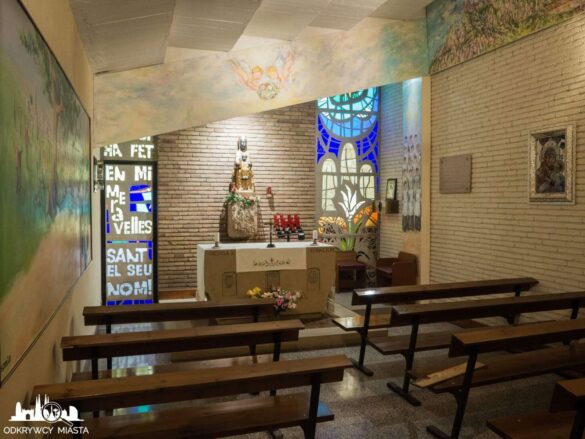 The next step is taken to the corridor where the players come out onto the Camp Nou pitch, but before we go there, it is worth paying attention to the small chapel located in the corridor. According to legends, the two FCB players who took part in the procession. After the feast was over, they left this holy figure in the hiding place, which at that time was located in this place, and they set off by car back home. Unfortunately, on the way back they had a terrible accident, but despite the fact that they were wounded and terribly battered, they managed to survive. Out of gratitude, they created this small chapel where services are currently held for a small number of people associated with the club. The stadium is full of such amazing stories.

From here, we can admire the Camp Nou stadium in all its glory. The number of seats and the vastness of this stadium impress everyone who visits it. We can also sit on the bench here or take a photo with the stands and grass in the background. This moment is especially special for children, when they can feel the magic of this place. We continue our tour of the stadium by climbing the crown of the stadium, but first we should sit on the Camp Nou Barcelona stand of this gigantic stadium, which can accommodate almost 100,000 people. people. This is as much as a city the size of Słupsk can accommodate!

The rest of our walk will lead us to the crown of Camp Nou Barcelona, ​​where from the height of the journalistic and commentary boxes we will be able to report on the events of the Barcelona stadium record like real rapporteurs. This place is also very popular among children. Ending the Camp Nou tour, we again go to the club museum, but this time to the part where we will learn how the club educates young players and we will get information about the club’s future plans, including the expansion of the current Camp Nou and enlargement of the in Barcelona stadium. to over 105 thousand people. 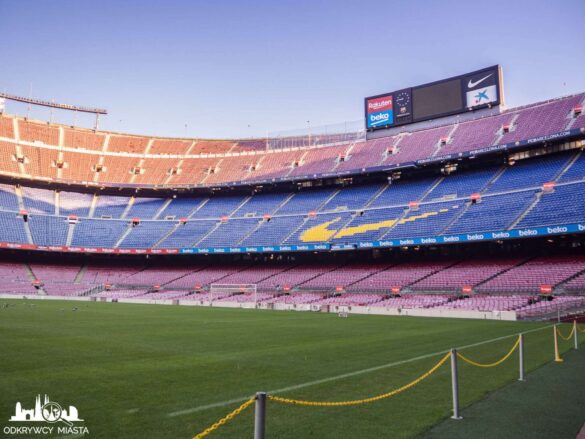 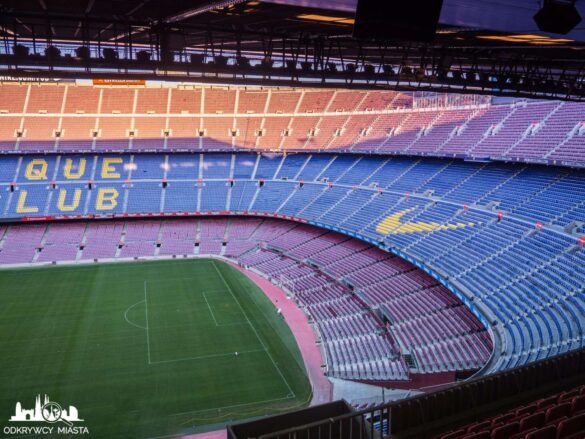 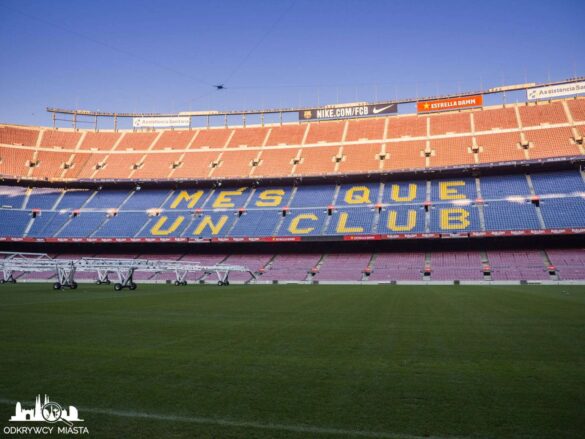 And do you realize that when FC Barcelona and Real Madrid play together, despite the gigantic size of the stadium, it is filled to the last seat! But it is no wonder, these matches have gone down in football history as El Clasico, and they are played by the best 2 teams in the world. These teams, in turn, feature the best footballers in the world. The last years of European football were dominated by 2 players representing Barcelona and Madrid, i.e. Leo Messi and Cristiano Ronaldo, and their domination lasted almost 10 years. Someday we will remember with nostalgia those days when these two great soccer players competed against each other at the Camp Nou or the Santiago Bernabeu.

This way we end the Camp Nou tour, leave the FC Barcelona museum and, following our steps to the exit, we reach the largest club shop in Barcelona, ​​where you will find all possible souvenirs related to the club. It is worth buying something related to your visit to Camp Nou in Barcelona. Especially since a shop of such a large size is not a standard. And here we really get all possible gadgets related to the club, including of course t-shirts and match kits, although their prices in euros may seem quite high.

Finally, it is worth mentioning that the museum is open every day of the year, although sometimes it is possible to visit only the part where the cups are located. This is the case when a match is to be played in Barcelona on a given day and the staff prepare the stadium for the tournament. It is worth checking this in advance so that it does not turn out that you need to change your plans.

After leaving the museum, it is worth looking around, because in this area belonging to FCB there is also Palau Blaugrana, where basketball, handball, indoor soccer or roller hockey teams play their games and very close, because there is a smaller one on the other side of the street. brother of Camp Nou, or mini estadi stadium. Its capacity is only 15 thousand. places and matches on it are played by Barcelona’s reserve teams. When in Barcelona, ​​it is worth visiting this place, because now, along with the reconstruction of the current mini-estadi stadium, it will be demolished and in its place a new Palau Blaugrana hall will be built. You can find all information on this subject on the club’s website. 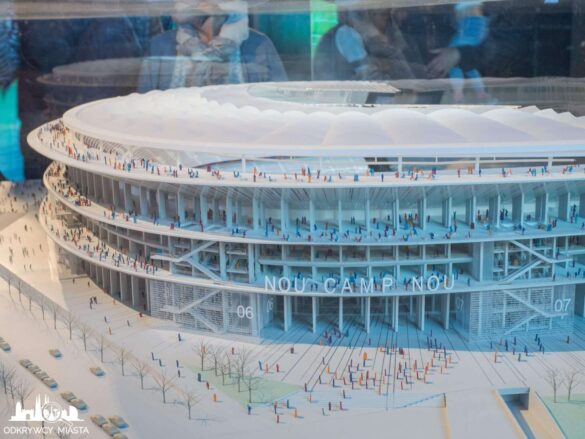 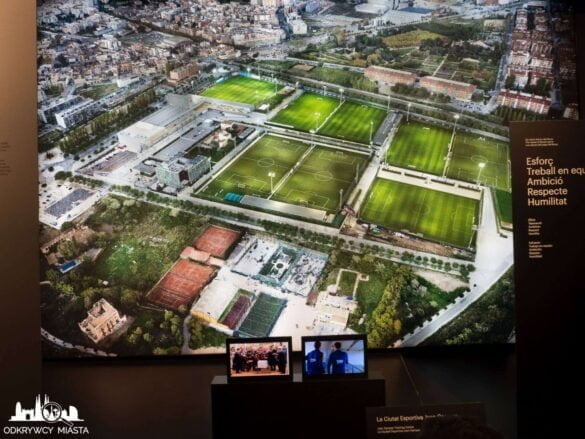 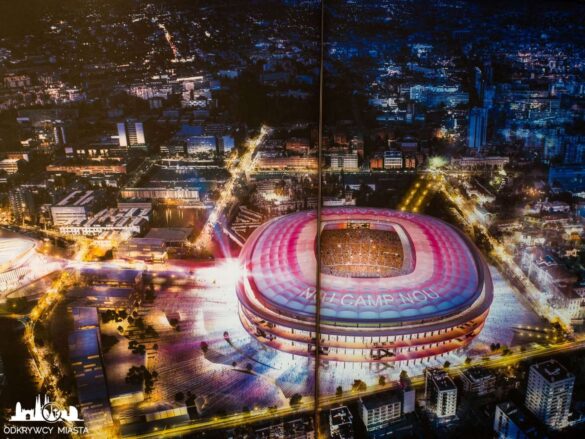 This is not the first redevelopment that awaits Camp Nou. The stadium itself was not built until the end of the 1950s, when the previous stadium in the Les Corts district was no longer sufficient for the fans visiting it. At that time, the club’s management decided to build a new stadium, which was able to accommodate a much larger number of fans than the “small” old stadium. It was then decided to buy a plot of land in Barcelona, ​​on which a new stadium was built, i.e. CAMP NOU in Catalan, and this is how the current FCB base was created.

How To Get To Camp Nou?

There are several ways to get close to the stadium, but the best and most convenient at the same time is to use the metro line, which will take us to the vicinity of FCB. We should use the blue line L5 and get off at the collblanc station, and from there we will walk about 600 meters to the stadium. We can also use the green line L3 and get off at the Palau Reial station from where we will have to walk about 500m to the stadium. At this point, it is worth mentioning that currently a metro station is being built right next to the stadium, however, the completion of construction is scheduled for 2024. It is also worth remembering that we will cover a similar path after the match is over, with the difference that from 70 to 100 thousand people will travel with us. people! Despite this, the metro handles such situations excellently and “unloads” the resulting traffic jams in the blink of an eye. Another way to get to Camp Nou is to use the tram line. Here, too, we will have to go to the stadium, in addition, a tram is a means of transport used mainly by people living on the outskirts of Barcelona and practically absent in the center. It is important because the matches at the Barcelona stadium can start very late – for example, the match for the Spanish Super Cup last year started at … 23.15, as a result, after the match is over, it is good to know the exact way to the hotel, yes, so as not to wander around Barcelona (remember that, depending on the day of the week, the metro only runs until 12 o’clock at night)

Is Camp Nou worth visiting?

In our opinion, the Nou Camp Stadium and the club museum are a must-see on the map of attractions to visit while in Barcelona. However, we understand that not everyone is as excited about football as the inhabitants of Catalonia and for some a visit to the club museum may seem boring, but I assure you that after seeing the club museum filled with all the cups, when you step onto the pitch or when you see the stands up close it’s different, you look at this amazing largest stadium in europe. While in Barcelona, ​​consider this attraction and take a day to visit this amazing Football Club Barcelona! / 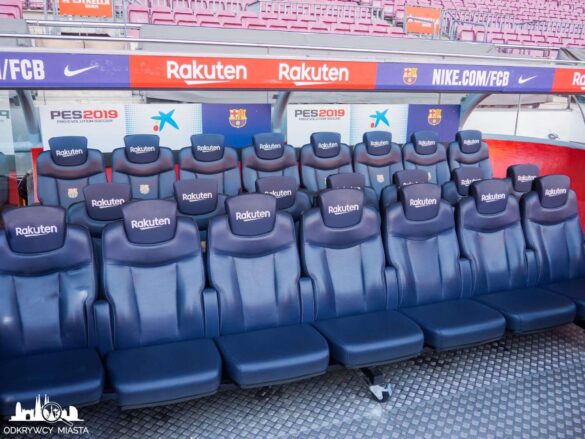 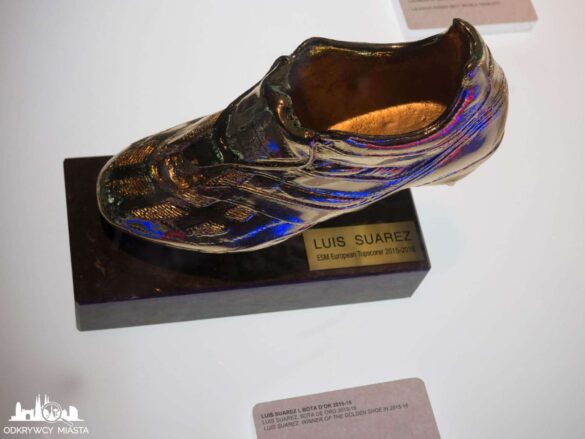 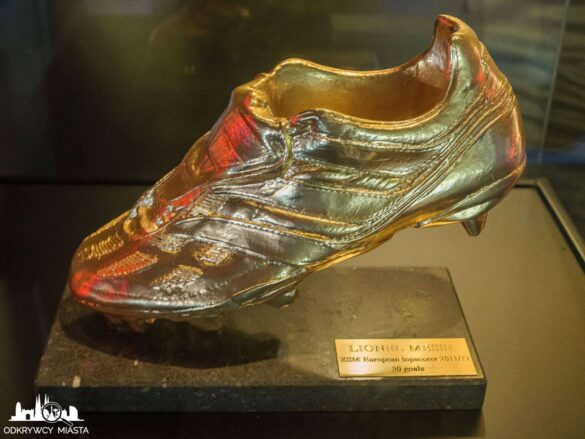 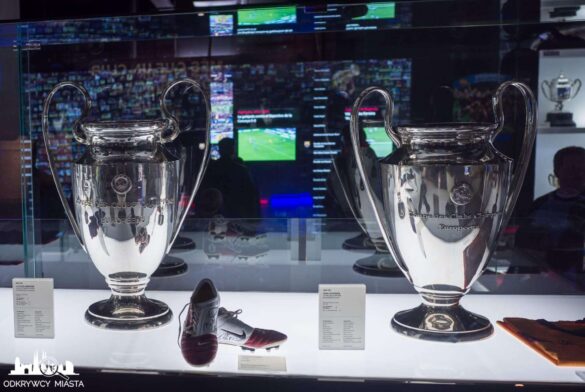